To keep up to date with all the latest developments please visit our news page where you can find details of general news of interest and our regular rail user group meetings.

The Group’s main aims are:

(a) To encourage greater passenger use of the rail line between Sunderland, Hartlepool, Stockton and Middlesbrough, as well as services beyond these limits.

(b) To actively campaign for better rail services. 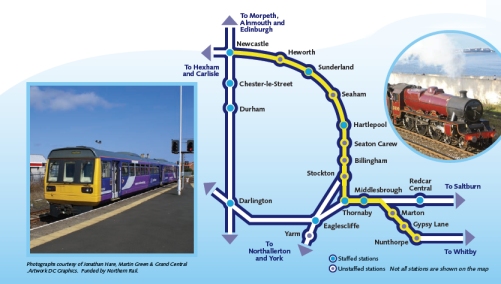 The group has several aspirations for improvements on the Durham Coast railway including:

The group meets approximately five times per year, usually in Hartlepool when we discuss the latest news relating to the line. Meetings are open to anyone supporting the above aims, though you are encouraged to become a member of the group for which there is a small annual subscription. Click here to join

Most meetings have a guest speaker from within or associated with the railway industry. If you would like more information, please contact us.

The railways of East Durham were originally built to serve the coal mines with passengers being a secondary consideration. The present coast line resulted from the joining up of many of these colliery lines. This was not completed until as late as 1905 when the North Eastern Railway connected Hartlepool with Lord Londonderry’s railway at Seaham, a project that required the construction of several large viaducts across the Denes. The original web of lines can be seen on the historic tile maps still in situ at Hartlepool (then West Hartlepool) and Middlesbrough stations.

Trains generally run to MetroCentre and Hexham with some trains running to/from Carlisle. On Sundays in the summer there is a through service to and from Whitby.

Connections are available at