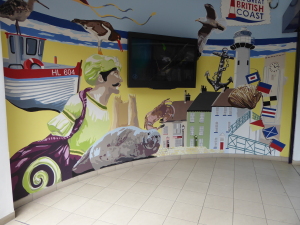 The Hartlepool Coast art in the west entrance to Hartlepool station was formally ‘launched’ on 28th June with a civic ceremony in nearby Christ Church art gallery. Artist Suzie Devey described how the design of the mural had evolved to include differing aspects of  Hartlepool coastal life, even including suggestions from passengers as they passed by during the weeks of painting, and the problems of fitting it all into a 13ft x 20ft space. This was followed by a preview of the video of the coast that is now continuously running on the big screen. Produced by Jeff Newton it was made using a combination of time-lapse photography and a camera drone. You can watch the video whilst waiting for a train or see it now   here