Saturdays from 23rd Feb to 23rd March. All lines closed north of Thirsk from 2000.

The 1927 GC departure from KX terminates at York

An additional train departs York 1925 for Sunderland (but is also subject to the alterations  above on 9th& 23rd March!). This is the last northbound train from York 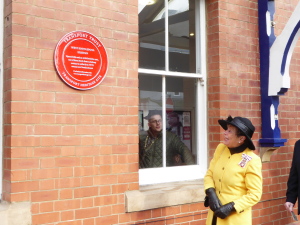 West Hartlepool railway station is the only railway station in Britain to have suffered a direct hit from naval shell attack during wartime. This occurred on 16th December 1914 during the Bombardment of the Hartlepools by battlecruisers of the Imperial German Navy.. During a frantic 40 minutes, more than 1,250 high explosive shells rained down on the Hartlepools killing at least 114 civilians, 9 soldiers and 7 sailors, and wounding over 500 people. More than 100 years later, the shell damage caused to the station that day is still visible.

Two Autocars, numbered 3170 and 3171, were constructed by the North Eastern Railway in York and, after testing, were respectively sent to West Hartlepool and Scarborough for trials on passenger routes. Arriving in the spring of 1904, the first Autocar, No. 3170, ran between West Hartlepool and Hartlepool railway stations. It was the world’s first rail vehicle powered by an on-board internal combustion engine and could be said to be the forerunner of all modern diesel railcars,

To accompany these there are two interpretation boards  next to the Tile Map designed by the Friends of Hartlepool Station and Hartlepool Museums.