Coastliners along with other rail user groups and community rail partnerships as well as local politicians have been busy behind the scenes objecting to LNERs proposals for a completely new May 2022 timetable. Whilst giving additional and faster trains from Newcastle to London, the effect on other East Coast operators was to reduce and/or curtail services. The result was not only fewer trains stopping at Darlington but through journey possibilities slashed. For the Durham Coast it meant Northern’s trains running only between Middlesbrough and Newcastle, losing our long fought for extensions to Hexham in the north and Nunthorpe/Whitby in the south which provided through trains to James Cook Hospital and the Metro Centre. For these destinations a change and often a wait at Middlesbrough or Newcastle would have been necessary.

It would seem that for once someone has been listening as it has been announced this week that the implementation of the new timetable is to be delayed whilst the views of some 5000 objectors is considered. A big thank you to any readers of this blog that wrote one of those letters. We shall remain vigilant to see what transpires.

The Northern Belle dining train visited the Durham Coastline last weekend and was photographed at Hawthorn Dene by David Warren in a picture that captures the scenic beauty of our line. This picture is copyright of the photographer but reproduced here with his permission. 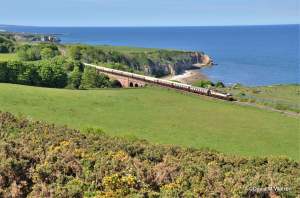 There are no trains running over the weekend of 5th/6th June due to engineering work between Doncaster and Kings Cross. However from Monday 7th June a new timetable starts with four trains daily from Sunderland to Kings Cross. You can find the new timetable here