In October we were invited to join Northern, TPE & other interest groups for two ‘Meet the Managers’ events at Middlesbrough & Thornaby stations. Here is our display with chairman Peter Walker in attendance. 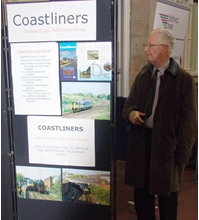 Passengers arriving & alighting at Middlesbrough will be well aware of the current access difficulties with the front approach route closed to both road traffic & pedestrians. These photographs show why this has been necessary with the arches supporting the roadway being in danger of collapse. A major redesign/rebuild of this entrance to the station will be required & may take some time.

The Office of Rail Regulation has granted new access rights to Grand Central which will allow continued operation of current services between Sunderland and London King's Cross and Bradford and London King's Cross until 2026.
Managing Director Richard McLean said " This ten-year contract term gives us the opportunity to make significant investments in our rolling stock, the stations we serve, staff training and development as well as other long-term plans to improve our services and encourage future growth. In the short term, this will include a refresh of our existing 180 trains to a similar standard as the recent HST refresh, as well as signing a lease for a full fleet of 180s and their associated maintenance. Over the long term, we'll also undertake work at the stations we serve along our routes to invest in passenger facilities.

By the time the station was officially opened by Transport Minister Baroness Kramer on 18th July, all the 'James Cook University Hospital Station' signs had been replaced by ones proclaiming just 'James Cook' which is how the station is to be known in future.

New timetable changes from 18th May

Further good news is that there is now a later evening service from Tyneside on Saturdays, leaving Newcastle at 9.30 instead of the previous 9.00. Whilst evening services have gradually improved during recent years, we aspire to having services late enough to enable Teesside residents to have an evening out in Newcastle or Sunderland before returning home by train.

Now the not so good news. Consequent on major changes to TransPennineExpress services to provide five trains per hour between Leeds & Manchester the times of TPE services to and from Middlesbrough & Thornaby have completely changed. As a result the previous good connections between TPE & Northern coast line services at Thornaby have been lost, with typical waiting times increased from 16 to 54 minutes in a southbound direction and from 15 to 34 minutes for passengers returning from Manchester, Leeds or York.
This is unacceptable to Coastliners and coastline users. Both TPE & Northern are aware of this problem, but it has apparently proved impossible to amend the coast line service because of the interface with Carlisle and Morpeth-Metro Centre trains in the Tyne Valley (the latter also being constrained by East Coast Main Line paths north of Newcastle), and also that with Saltburn line trains at Thornaby, these needing to fit with East Coast trains at Darlington. We are promised a recast in 2016 when TPE intend introducing a 6th hourly core train and the ECML timetable is reviewed as franchises are relet. Coastliners meanwhile are campaigning for an earlier solution.

For the best connections from Hartlepool into Trans Pennine trains to Leeds and beyond download Timetables on our links page.