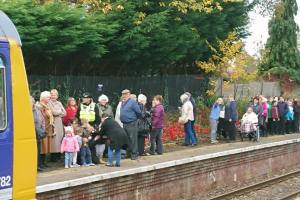 A short service of remembrance at Nunthorpe station was given by The Rev. Sue Greenwood and Rev Angela Levitt-Harwood, the north east Railway Chaplain from York,  It was well attended. by residents of Nunthorpe, children from Nunthorpe Day Nursery and The Avenue Primary School, members of the Neighbourhood Policing Team and Councillors from both the Redcar & Cleveland and the Middlesbrough sides of Nunthorpe along with representatives from the Parish Council.

The station display including many knitted poppies is now officially open. We ask that people, as always respect the display. 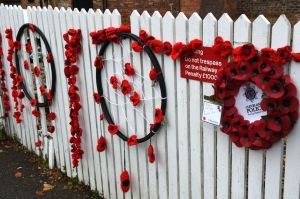